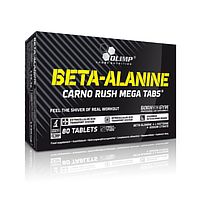 Β-alanine (C3H7NO2) is a non-essential amino acid. In fact, it is the only beta-amino acid that can be found in nature.

While α-alanine can be found in several nutrient sources including eggs, chicken, vegetable nutrient sources or certain dairies, β-alanine is produced in the body with the help of the enzymes beta-ureidopropionase and β-alanine synthase. Β-alanine is a by-product of carnosine breakdown and also a compound of pantothenic acid (vitamin B5).

How it works and which studies do support its effectiveness

While α-alanine facilitates the use of simple sugars like glucose as energy resources and plays a role in protein synthesis and enzyme production, β-alanine plays different roles. As a by-product of carnosine breakdown, β-alanine increases carnosine concentration in the muscles. Carnosine is a dipeptide, i.e. two joint amino acids, and it plays a critical role in increasing sports performance.

The pH-levels of the muscles lower during workout. When supplying instant energy, hydrogen ions are produced as by-products of fuel breakdown, which reduce pH and cause acidosis, an acidic condition which causes a burning sensation and muscle fatigue.

Carnosine plays a critical role in preventing muscle fatigue, as it works as a buffer that protects the muscles from acidosis, thus delaying fatigue.

As a by-product of carnosine breakdown, β-alanine can also be used as a precursor of carnosine. As an ingredient of supplements, β-alanine is delivered to the skeletal muscles, where it is reverted to carnosine, with the help of the enzyme carnosine synthase. Studies have shown that taking β-alanine might even increase the carnosine levels of the muscles by 64%! 1,2

Increased carnosine levels of the muscles might even increase the buffering capacity of the muscles by 20%! By increasing the lactase threshold, taking β-alanine can dramatically delay muscle fatigue and failure3, and significantly increases the performance of the muscles.

When is it necessary and what are the deficiency symptoms?

Β-alanine is not an essential nutrient, therefore there are no deficiency symptoms.

On the other hand, α-alanine deficiency can occur in rare cases, mostly in the form of neurological problems, stroke, hypoglycemia, diabetes or hepatitis. Long-term deficiency might even cause death.

What quantities should I take? Any side effects?

Always observe the information provided on the leaflet. Based on studies, maximum results can be experienced after 10 weeks of use. 7

Please consult your physician before you start taking any supplement.

Should you have a rare genetic disorder called hyper beta-alaninaemia, you shouldn’t take β-alanine.

Might cause slight erythema if taken in high doses. This is harmless and will go as you lower the doses.

I remember the time when one of my insane goals was to do 100 reps on a leg-press machine with 200 kgs. (I can recommend it to you if you wish to challenge your...