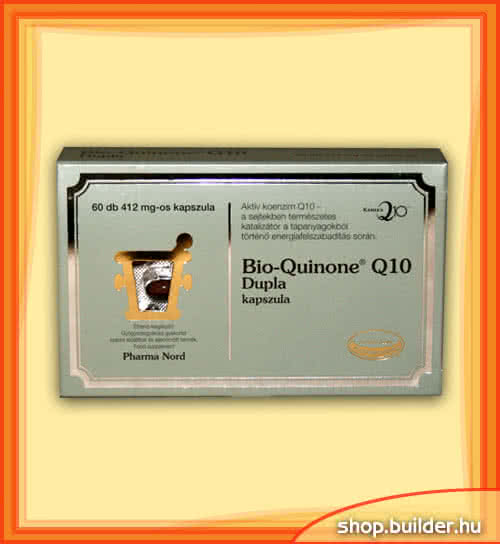 Storage
Dark, dry and at room temperature.
Keep out of reach of young children.

Bio-Quinon Active Q10 was launched in 1990 and was one of the first Q10 preparations on the European market. The soft light-proof gelatin capsules each contain 20 mg of coenzyme Q10 dissolved in vegetable oil. This dose is 5-6 times higher than the amount of Q10 we normally get from the diet. The active compound has extremely good bioavailability due to the fact that the oil matrix in which it is contained has been submitted to a special type of heating that enables the molecules to dissolve completely. Bio-Quinon Active Q10’s superior bioavailability is documented in many studies. The many years on the European market makes Bio-Quinon Active Q10 into one of the most well-proven Q10 products.

What is coenzyme Q10?

Coenzyme Q10 is a vitamin-related substance with a crucial role in cellular energy metabolism. It contributes actively to the conversion of fat, protein, carbohydrate, and also alcohol to ATP (adenosine triphosphate), a molecule that stores energy in its chemical form. When a cell needs energy it splits the ATP molecule, releasing the energy that is trapped inside. The entire process takes place inside the cells in some small bean-shaped structures called mitochondria. Muscle cells need particularly large quantities of energy. For that reason, muscle cells contain substantially more mitochondria than other cell types. The heart muscle is a good example of body tissue with larger mitochondrial density because of the heart’s enormous energy requirement.

Q10 as an antioxidant

Coenzyme Q10’s ability to capture and donate electrons makes it suited for eliminating reactive oxygen species (ROS) that may occur naturally as byproducts of the body’s metabolism, or as a result of external factors like radiation or chemical pollution. Substances with these properties are called antioxidants. Supported by other antioxidants such as e.g. vitamin E, vitamin C, and natural enzymes, coenzyme Q10 constitutes a defense mechanism against such potentially harmful oxygen compounds.

Q10 occurs naturally in several types of food. Some of the best sources include:

In addition, we humans are able to synthesize our own coenzyme Q10. The endogenous production takes place in the liver. With increasing age or as a result of disease, the ability to produce our own Q10 decline. Experts believe that the body’s Q10 content peaks when we are 20-25 years of age. From this point onward, the endogenous production begins on a downward slope. 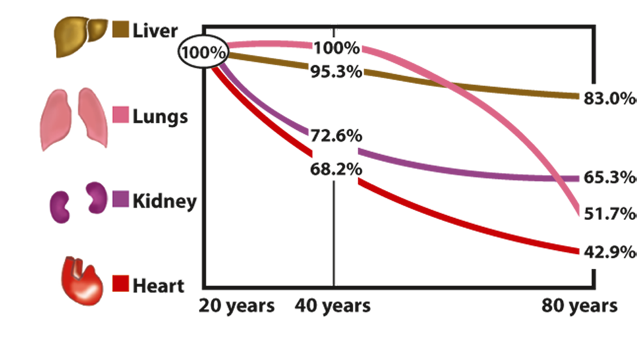 The illustration shows the average, natural drop in Q10 content of different organs from the age of 20 to 80 years

Although it has not been established accurately the diet is thought to provide somewhere between 5-10 mg coenzyme Q10 daily. The body has its own 1 – 1.5 gram Q10 reserve, with most of the compound stored in the heart, liver, and kidneys.

Q10 and cholesterol share the same biochemical pathway (cholesterol is also synthesized in the liver). Studies have shown how some cholesterol-lowering drugs inhibit the body’s endogenous production of Q10.

Even long-term supplementation with Q10 does not affect the body’s endogenous production of the compound. There are only few side effects connected with use of coenzyme Q10, which makes it a very safe substance. There is more than 20 years of experience connected with the use of Bio-Qinon Q10.

There are several biochemical rationales for using coezyme Q10 supplementation: