Enhanced mass and muscle gains
Experience has shown that creatine usage results in increasing lean body mass, mostly muscle mass.
Delayed fatigue
Faster recovery and more strength enables longer and more intense workout, which triggers anabolic processes.
Increasing muscle size
Creatine usage can increase the size of muscles significantly, even by centimeters. And the results will remain in the long run, provided that both training and nutrition are appropriate for this purpose. 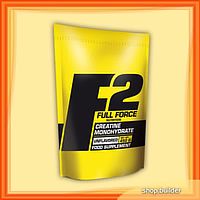 Creatine was discovered by Chevreul, a French scientist in 1832, as a compound of meat. Although research has already shown it in the 1920’s that it can have a positive impact on physical performance, it only became widespread among athletes in the 80’s and 90’s. It also arrived to Hungary around that time. Ever since, athletes in various sports use creatine (successful tennis players, football players, weightlifters or bodybuilders), and they are highly satisfied with the results. In recreational sports, it is considered a useful mean of achieving a better look by transforming the body. And this opinion is actually based on scientific results.

Creatine is one of the few supplements that bring really spectacular results fast and safely. One of the main mechanisms of action is providing a better energy supply to the skeletal musculature, which enables longer and harder workout. Strength and performance will increase, and the muscles become fuller and larger. Creatine is naturally found in the body and in our food, therefore the body can handle it easily. It is synthesized in the liver, the pancreas and the kidneys with the help of arginine, methionine and other amino acids and enzymes. The purpose of creatine supplementation is to increase the creatine and phosphocreatine levels of the body, since these substances play an important role in recovering ATP, a substance with high-energy phosphate bonds. Creatine phosphate plays an important role in the recovery of ATP that is transformed into ADP to satisfy the energy requirement of exercise. Following from this, you can make the most of it in sports of high intensity and energy needs (anaerobic). The daily creatine loss (2-3 g per day) is supplemented by the creatine from food sources and the creatine produced by the body. Insufficient folic acid or B12 intake may limit the body’s own creatine producing capacities. The normal concentration of creatine in the muscles is about 125 mmol/kg of lean muscle mass, which can be raised to 156-160 mmol/kg or slightly above. This growth also depends on the starting creatine level, which is influenced by physical fitness, nutrition and individual biological characteristics. For this reason, it may happen sometimes that creatine supplementation is of no or little effect. Creatine and phosphocreatine synthesis is higher in young people. Therefore, supplementation may become more effective with age, as creatine synthesis decreases. The anabolic effect of creatine prevails in increasing cell volume and glycogen levels, which results in better performance and protein synthesis. There is no unequivocal scientific evidence on the water retention effect, so let’s talk about muscle gain for the time being. Insulin makes the muscles store more creatine. The creatine content of the musculature returns to its normal values slowly, in about 4 to 6 weeks.

In supplements, it is most commonly used in the form of monohydrate or phosphate. In principle, there is no significant difference between these forms; any difference mostly comes from other ingredients or the overall quality of the products. Some people prefer monohydrate, while others prefer phosphate. However, this seems to be an individual preference, without any scientific background. Still, you should make sure that you choose a product from a reliable source, which is made of pure substances. And this usually leads consumers to monohydrate. Besides “pure” creatine powder (which contains creatine only), various creatine transport systems are also popular. The latter contain carbohydrate (dextrose), too, in order to enhance creatine uptake by stimulating insulin secretion and thus raising the insulin levels of the blood. A new version is the effervescent creatine. This may be more effective than the other forms. However, there are not enough professional reviews yet to support a firm decision for any product. All you can do is try.

Creatine improves performance in many sports significantly, even by several per cents or several ten per cents. It is mostly beneficial in sports that require great strength and intensity and last for a short time. In endurance sports, these benefits do not prevail so strongly. Moreover, in some sports, for example, swimming, it might even have a negative impact on the results because of the extra weight. However, this is more like an assumption and, if we allow the body some time to adapt to it, the benefits may overcome the drawbacks quickly.

Creatine is usually taken in “loading” and “maintenance” doses. The purpose of loading is to maximize the creatine levels of the muscles in the shortest time possible. Doing so, you can experience all of its benefits sooner. The usual loading dosis is 5 g (1 teaspoonful) of creatine taken 4-5 times during the day. About 1 dl of water is required for each gram. Plus, your daily fluid intake matters a lot, too. It is not recommended to take creatine at times of water restriction (for example, directly before a body-building contest). The maintenance dosis about 2 grams, after a loading phase of 4 to 6 days with 20 grams/day. The body takes up the most creatine in the first two days, so you may reduce the dosis by 5 grams from the third day on. However, this is not absolutely necessary, especially if you use like 10-15 grams for maintenance, too, as many do. But 5 grams a day (that is twice as much as the maintenance dosis) must be enough for anyone, even for a person with more muscle mass. So, loading doses of 30-40 grams or maintenance doses of 10-15 grams are just unreasonable, even for individuals with more mass. Creatine is not an easily soluble substance. You may dissolve 5-10 grams in 200-300 ml of warm water, then thin it up with cold water. Research has found that a blend combined with 30-35 grams of carbohydrate proved to be more effective at increasing performance and muscle concentration as a plain creatine+water blend. By adding 75-80 grams of carbs instead of 30-35, you can achieve even higher insulin levels, thus you can boost the positive effects, too. Or, you can achieve the same results by mixing about 40-50 grams of protein with 40-50 grams of dextrose in about 1 liter of water. But the simplest method is to use a creatine transport system. Most of them contain other ingredients, too, which cannot be purchased separately. A course of creatine may last for 2, 3 or 4 months. You should take a pause of about 6 to 9 weeks after each course.

As insulin imitators, D-pinitol and alpha lipoic acid enhance creatine uptake and storage, the latest studies have shown. So, it’s worth giving a try to these products (in Hungary, only lipoic acid and products with added lipoic acid are available).

By using creatine with whey protein, you can maximize the results in muscle mass gains.

Caffeine (coffee, cola etc) though does not impact absorption or protein synthesis negatively, but it does hinder the performance-boosting properties of creatine.

You can ingest some creatine with meat. Or, your body can synthesize it, too, from the proteins you eat. However, its benefits on sports performance cannot prevail this way, because creatine breaks down quickly during the heating and digestion processes of meat, and your body will not produce more than the quantity it “deems” sufficient. And this is not enough for athletes.

The side effects of creatine have been researched extensively and – thank God – without any result. Still experts are reluctant to say anything concrete on this matter, because theoretically, they assume several unfavorable side effects including permanently limited creatine synthesis, diarrhea, muscle cramps or dehydration. However, these are just hypotheses: there is no scientific evidence for any liver, kidney or muscle damaging effects, and the decrease of creatine synthesis is considered fully reversible in technical literature. Based on the most recent studies, there is no need to fear any creatine side effects if the doses do not exceed 20/5 grams significantly. However, if you have an existing kidney or liver condition or any other serious health problem, you are pregnant or breastfeeding, you should consult your physician or a sports medicine specialist. Endurance athletes have reported cramps and a feeling of tension in the muscles. However, research has not confirmed but on the contrary, refuted these symptoms. So, in this case, you should monitor your body’s reactions to decide whether to use it or not.

Safety: This substance is safe.

Contraindication: It is not on the IOC list of prohibited substances. However, they consider to put it on the list every now and then, and it is actually on the doping list in some countries.

Creatine was discovered by Chevreul, a French scientist in 1832, as a compound of meat. Although research has already shown it in the 1920’s that it can have a positive impact on physical performance, it only became widespread among athletes in the 80’s and 90’s. It also arrived to Hungary around that time. Meanwhile, various horror stories arose about its side effects and dangers including the view that it should be put on the doping list. These views could not be justified in practice. However, this topic keeps coming up from time to time. Creatine has undergone a lot of innovations since it appeared on the market as a supplement: for example, discovering loading or supporting it with carbs, the protein+carbohydrate+creatine combination, insulin imitators or effervescent products. And this may not be the end...

Q & A on Creatine products

Is creatine a steroid or drug?

Creatine is an amino acid derivative that appears naturally in our food (meat, fish etc), and our bodies can synthesize it as well. If you eat a lot of meat, you might consume several grams of creatine. Still it will be less than the amount required to enjoy the positive effects. So, it won’t be difficult for your system to break down and secrete the excess creatine. In intelligent countries with intelligent sports organizations it is not considered a prohibited substance, so even Olympic athletes are allowed to use it, and so they do. It would be unreasonable to label it as a steroid or prohibited substance, either based on its chemical structure or the related risks or restrictions. The positive results that can be achieved by using creatine are the closest to those of steroids among supplements, but without the inherent risks.

What are the risks of creatine usage?

The recommended doses do not cause any symptoms or harm to healthy individuals. However, high doses (30 g and up) may cause some problems. Some athletes believe in “the more the better”, no matter what, so they use mega doses, which may cause unforeseeable serious problems.

Is creatine safe for athletes under the age of 18?

In principle it is, because there are no known side effects or interference that would affect physical development. However, you should consult your physician, sports medicine specialist or nutritionist. If you want to play absolutely safe, we wouldn’t recommend it. However, it is definitely less harmful than illegal doping substances that impact health and physical development in many negative ways.