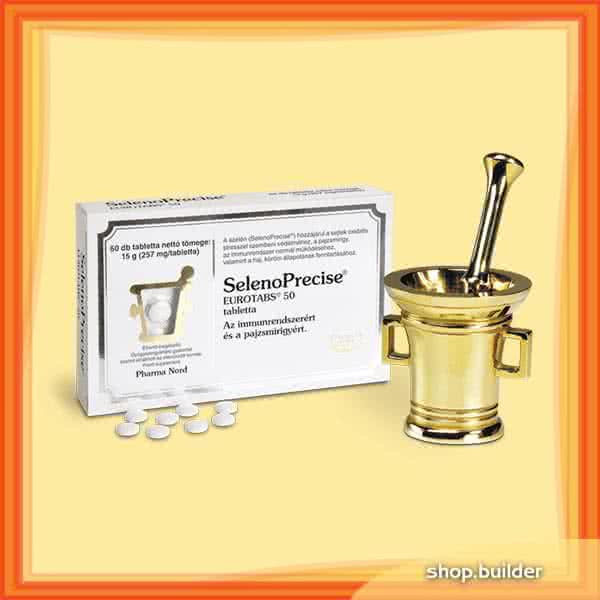 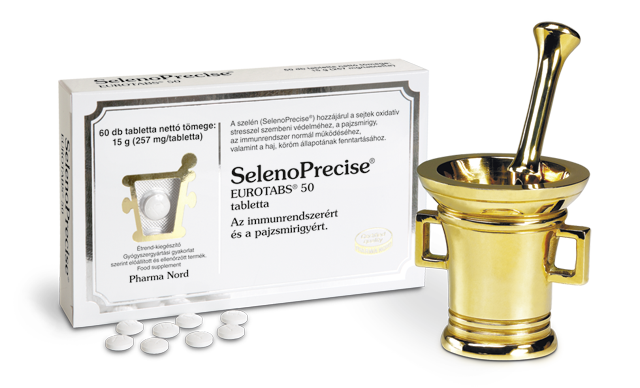 Do not exceed the recommended daily dosage.

Dietary supplements should not replace a varied diet.

A healthy lifestyle and a varied balanced diet are important for maintaining good health.

Storage
Dark, dry and at room temperature.
Keep out of reach of young children.

SelenoPrecise 50 µg is Pharma Nord’s patented selenium yeast. It consists of small, round white tablets each containing 50 micrograms of selenium in the form of high-absorbable organic selenomethionine and more than 30 other organically bound selenium compounds. The preparation is unique in the sense that it it emulates the various selenium compounds we get from selenium rich food and is able to document a very high level of bio-availability and a stable quality:

More than 40 scientific studies have been published having dealt with the quality, the stable 81% selenium content, the high level of bio-availability, and the safety of SelenoPrecise. This is what makes the preparation an extremely well-documented selenium source. Also, it is the main reason why SelenoPrecise is used in scientific studies and research projects worldwide.

Why so many different selenium sources?

SelenoPrecise contains many different selenium sources because each type of selenium has different functions in the human body. By supplying a wide spectrum of selenium types it is possible to emulate the natural variety of selenium types found in food containing selenium. This, scientists believe, has the best effect on our health.

Selenium is an essential trace element that supports an array of selenoproteins and selenium-dependent enzymes that are important for human health and well-being. One of these enzymes is glutathione peroxidase (Gsh-Px), which has several important functions in the body. In addition, selenium support a normal thyroid function. The thyroid function helps the metabolism in balance. Furthermore selenium supports biological processes as:

Most of the selenium in the body is found in two forms: Selenomethionine (that is embedded in different proteins instead of methionine) and selenocysteine.

In situations where we get too little dietary selenium, the body is able to use selenium that is stored in the body, simply by converting selenomethionine that is bound in different proteins.

SelenoPrecise contains both of these main selenium sources (selenomethionine and selenocysteine) plus several other selenium compounds.

The ability of selenium to bind to heavy metals

In the body, selenium binds to different heavy metals and forms insoluble compounds that are eventually discharged from the body. This process consumes some of the available selenium, leaving less for other important selenium-dependent processes*. Studies show that selenium binds mercury in a 1:1 ratio.

Where is selenium found?

Selenium is found in such things as fish, nuts, whole-grain. People who do not consume these food items regularly may benefit from taking a selenium supplement for the sake of getting sufficient amounts of the nutrient. The recommended daily allowance (RDA) for selenium is around 50-70 μg (differs from country to country), were men generally need a little more than women.

The diet in low-selenium countries such as Denmark, in contrast, provides as little as 45-50 μg selenium per day.

The EU Food Safety Agency (EFSA) has evaluated the evidence behind the product's content of selenium and has acknowledged the following statements: