Three Heads Are Better Than One

In this article T. C. Luoma gives you insight to all the knowledge you might need if you want huge and spectacular arms. Now you can read about both his beginner and intermediate workout routines. 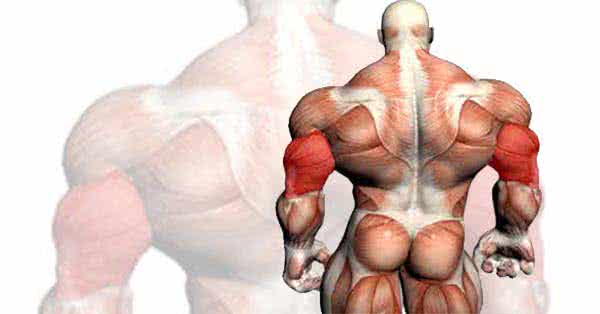 Many start bodybuilding because they want larger arms. Consequently, they devote much more attention to biceps workout than to triceps exercises, even though most of the arm’s mass is provided by the triceps, especially if the arm is not flexed. Since the triceps is a bigger muscle group than the biceps, it quite self-evidently needs more training than the other, two-headed muscle which makes up only the smaller part of your arms.

The following beginner and intermediate workout routines are based on the order of the exercises and on strict form. The intermediate program assumes that you have already mastered proper techniques, and focuses mostly on the development of weaker areas. In addition, it also applies special shocking techniques that will trigger further growth in your triceps.

Let’s get to the point: your elbows shall not move! Here’s a technique you may practice at home, before you get down to real triceps workout.
Stand in front of the mirror, with your arms hanging next to your body. Take a deep breath and... Do nothing. You’ve heard it right: all you have to do is keep your elbows in their place.

Of course, I’m just kidding now. This is obviously not a technique, but it clearly shows what the point is. Most people throw their elbows apart during triceps workout more than an NBA basketball player does, when landing with the ball. If you always keep in mind that your elbows must not move, you are already more than halfway on the road to correct technique.

One of the best triceps exercises is pushdown on a pulley lat machine. Get a straight or slightly bent handle you can grab with your palms facing down (overhand grip). With this grip you can load the inner head of the triceps. If you would like to load the lateral head, use a rope you can grab so that your palms are facing towards each other and your thumbs are facing upwards. You can achieve full development with these two variants. However, in this phase it is enough if you alternate both grips from one workout to the other.

Now let’s see the correct form: Stand towards the handle and grab it overhands with a grip width of 20-25 cm. Slightly tilt your trunk forward so you can reach full contraction without the handle hitting your knees. Then, push the handle downwards while keeping your elbows still. At the moment of the peak contraction (at the lowest point), flex your triceps hard, halt for a second or two, then, slowly let the handle go back to the starting position. 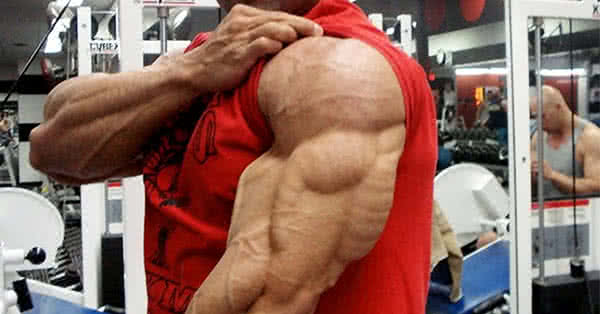 Only use your triceps during this exercise. This is not an ab exercise, so do not hunch your back. And, since this is not a back exercise either, do not try to push the handle down using your lats. Controlled cheating move is allowed once you reach intermediate level, but at this point, you should focus at the correct form.

Regarding the number of reps, you’ll see in time what works best for you. However, you may start with 3 sets, 15 reps each. If your triceps are burning and pumped, it is a sign that you are doing the exercise correctly. If you are not feeling it, try more reps. Sometimes it takes more training to get the groove.

Supine triceps extensions often prove to be difficult, as strict form is a basic requirement. However, they are worth the effort, because they make the full triceps work hard. Grab a straight bar or an EZ-bar and lay down on your back on a horizontal bench. At the starting point the arms are stretched, the elbows are fixed, and the bar is in line with your eyes. Once you got this, move it slightly towards the top of your head so that your arms are positioned to the ground in an angle. Doing so, the load will not even cease at the top position. If your arms were positioned to the ground in an angle of 90 degrees, the load at the top position would go fully to the joints and the bones, but hardly to the muscles.

So, at the starting point: imagine your elbows are fixed at the point where they are now. Next, bend your arms and lower the bar to your head. At this point the triceps are fully stretched. Without your elbows moving, lift the bar back to the stretched starting position, flex your triceps at the top position, halt for 1-2 seconds and repeat. The movement should be slow and controlled. Similarly to the previous exercise, start with 3 sets, 15 reps each.

Now let’s see how a beginner triceps workout is made up:

*Alternate the straight handle and the rope versions from one workout to the other.

How often should you work out? Once a week is better than nothing, twice is better than once and three times is usually better than twice. You do not need more. If you work out persistently 2 or 3 times a week, in 4-6 months you will be ready for the intermediate routine for sure. 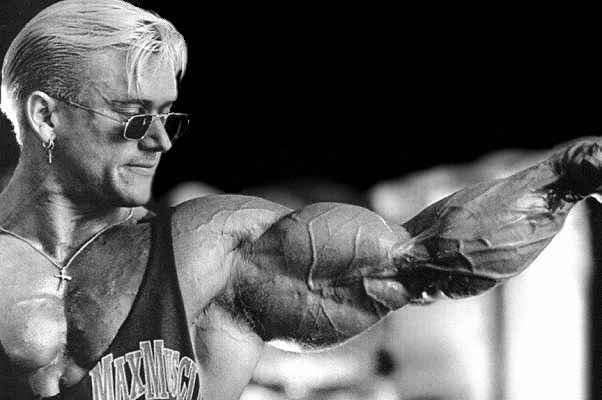 Since the two previously mentioned triceps exercises (pushdown and triceps extension) make up the foundation of most triceps programs, I recommend that you keep on doing them. Now it’s time to do these exercises until you reach muscle failure, while you should also add other exercises to your routine, with occasional forced repetitions and supersets. A combination of pushdowns and kickbacks works well. After a set of pushdowns, grab a pair of lighter dumbbells and do some kickbacks. No need to do a set of kickbacks after each of the 3 sets; one or two sets will be fairly enough. Here too, it is very important that your elbows shall not move. At the top position of the kickbacks, when your arm is stretched, your upper arm should be parallel to the ground. After the peak contraction, lower the dumbbell in a slow and controlled manner (think of your elbows as links only). Then, “kick back” again, without swinging your body. Here too, the movement should be slow. Finally, flex your triceps for 1-2 seconds at the top position, before lowering the dumbbell.

For higher intensity, you may do this exercise with both arms simultaneously. Although kickbacks are usually done single-handed, there is actually nothing we could say against doing them with both arms. 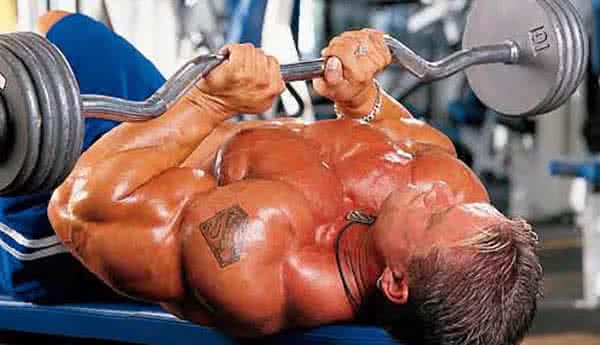 The third extra exercise I usually recommend for intermediates is dips. This exercise work all three heads of the triceps. Believe it or not, I recommend that you do one single set, with one single repetition. Doesn’t seem too much, does it? Well, try this: your upper body should be perpendicular to the ground (if you lean too far ahead, most of the load will go to your pectorals). Keep your elbows close to your body. Then, lower yourself as slowly as you can, even if it takes one whole minute. Once you have reached the lowest point, push yourself back again similarly. Prolong it as much as you can. That’s all—you’re done.

So, your intermediate triceps routine will be as follows:

*Alternate the straight handle and the rope versions from one workout to the other.

And, once the day will come (most probably after 1 or 2 years of training), when you’ll feel this intensity is not enough for you, or your development started to stagnate. Once this happens, it’s time to move on to an advanced routine.

Only for advanced bodybuilders: attack from every angle

As in the case of every advanced routine, the ultimate goal is to work the target muscles by going beyond the pain threshold. And this can be realized through forced repetitions, supersets and giant sets which will guarantee that your triceps will be in flames at the end. Now it’s time to develop the problem areas, too. For example, if you have mostly worked the upper part of your triceps so far, you can trigger growth in the problem areas using partial repetitions.

Almost all of the above-mentioned exercises work the lower part of the triceps, provided that you do them in the lower motion range. In the case of pushdowns, for example, do not let the handle/rope go back to the top position, only to 1/2 or 3/4 of the full motion range. Then, push down again.

If the inner head doesn’t develop the way it should, try single-handed cable extensions. If your thumbs are facing downwards, the inner heads will get more stimuli. 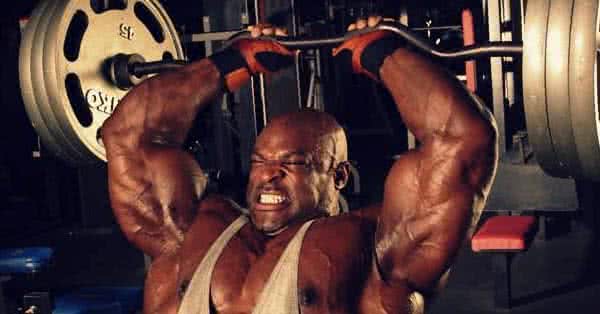 Beside increased intensity and developing problem areas, one of the key pillars of an advanced routine is that it works the target muscles from every possible angle, involving muscle fibers into the work which might not have been provided the necessary stimuli so far. Let’s see an example, which is also a good example for challenging your will-power: do cable pushdowns until failure (this will work the lateral head). Then lower the weight and do a set with reverse grip, without rest (this will bomb the medial head). Finally, grab the lower cable and do a set of kickbacks to give the coup de grâce to the long head as well.

Before (or after) this giant set (remember: variety is the spice of life), do some dips between two benches. Preferably, you might as well add some extra weight (15-20 kg); then, push as many reps as you can. After you reached failure, your training partner will take a weight plate off of you, and you will go on as far as you can. Do this exercise to the point when you can not even push your own bodyweight any more.

There is and endless galore of various versions and techniques. Any of them can be effective, provided that you persistently attack your triceps from every angle and you have that burning sensation in your pumped triceps after workout. 9 sets is enough for some, while others may need twice as much. But, by the time you reach advanced level, you won’t need anybody else to prescribe it for you; you will feel it yourself.

Sit-ups, curl-ups, leg raises... an exhaustive ab workout may take several exercises. So let’s see an exercise now, which can be enough in i...
Genetics

This word has become very trendy nowadays. Have you noticed it, too? Like something that “cannot be changed”. “Unfortunately, I cannot do an...
Brutal Branch Warren leg workout

A champion can always say something new. You can always learn some new tricks you can incorporate in your training program. Some of these mi...