Shopbuilder Articles / Bodybuilding and fitness articles / Everything about weight training / Who is the Most Underrated Bodybuilder in History?

Who is the Most Underrated Bodybuilder in History?

Mr. Olympia-winning bodybuilders get all the hype they deserve. But what about those who received second playing many times and therefore are often overlooked or aren't remembered at all?

In bodybuilding's history, there have been numerous competitors who did not receive the Sandow, and therefore weren't as popular as they should have been. Let's change that.

You will see – I will show you bodybuilders that may be even more impressive that certain Mr. O-s, but you may never have heard of them.

Here come bodybuilders who received undeservedly few honors and should have deserved much more admiration from the fans and/or the judges!

Let's start the enumeration with one of my favorites, Markus Rühl, who, interestingly, will be the exception on this very illustrious list. The reason being that I could have listed at least 100 bodybuilders that were absolutely amazing and have never won a Mr. Olympia title, but all of them are well known even today. This article is about underrated bodybuilders, and those who have a huge fanbase, are not underrated.

Markus will represent all of them (just like Ulana Khomyuk's character represented every single scientist in Chernobyl mini-series), who are all "uncrowned Mr. Olympia champions with a really big fanbase. Just like: Flex Wheeler, Kai Greene, Nasser El Sonbaty, Shawn Ray, Serge Nubret, Tom Platz, Ed Corney, Kevin Levrone, Branch Warren, Lou Ferrigno and on and on and on...

The others on the list will be really underrated and lesser-known bodybuilders.

I bet you don't know who he is - yet. I also bet that by looking at his physique, the following question will appear in your mind:

„How the hell this man has never won a Mr. Olympia title??!”

Thierry is so severely underrated that I cannot describe it with words. He arguably possessed the best arms in bodybuilding's history, you could grab his waist by two hands easily, plus his aesthetics and conditioning knew no borders. By the way, he was the protege of Serge Nubret.

The answer to the question above is given: he was one of the smallest bodybuilders ever with his 157 centimeters – had he been 10 centimeters taller, he would be called one of the greatest of all time. His active years fell between 1984 and 1994, or in other words, 8-time Mr. Olympia Lee Haney's reign, so put his physique into this perspective.

Had I been attending to his pro shows, my throat would hurt a lot by shouting:

Mustafa's name is known by undeservedly few people, even though there were poses where he did not only look as good as 4-time Mr. O champion Jay Cutler, but he was even surpassing him. Don't believe me? I don't blame you. But here is the proof: In the name of bodybuilding as a sport, I object Mohammad's undeserved bad placings on most of his competition shows. I feel the hands of politics in this. He had such full chest muscles that most of us only dream about, his huge, chunky legs resembled Tom Platz's (and easily beat Branch Warren's, which is no easy feat), his belly was flat yet muscular, and his arms were absolutely out of this world.

His only flaw must be his wide waist, which could be the only reason I can think of for his position on the scorecards of Mr. Olympia shows he was competing on.

Even bodybuilders got shocked when they looked at his thighs for the first time. Check this out:

His physique was often overlooked by the judges (we could say they were dilettantes if you know what I mean). The reason for this could be his horribly bad posing – I can't think of anything else. He looked like a real superhero amongst other bodybuilders, we can only see physiques like that in comics.

He would have deserved a Mr. Olympia title too – had he been born 15 years later, he would dominate today's Mr. Olympia lineup easily.

He was a real monster on stage. His physique resembled Dorian Yates's, I would rather not describe it with words, because you have to see this. Unbelievable muscle mass incoming:

Unfortunately, in the last couple of years in his career, his gut grew big, and he suffered a horrific injury during a photoshoot as he was squatting with 306 kgs, which sadly ended his career.

„Mr. Forearms”. Or „Mr. Triceps„. With his 163 centimeters of height and competition weight of just 100 kilograms, he belonged to the smaller bodybuilders, yet he was beating giants. For instance, he beat Ronnie Coleman 5 times (when Big Ron was not Mr. Olympia yet), which is unbelievable to heat nowadays. He was ripped, his arms were huge, his legs and calves were great, but maybe his body wasn't proportional enough in the eyes of the judges. He beat Jay Cutler, Dexter Jackson, Günter Schlierkamp, and Markus Rühl many times, yet he has never given the Mr. O title. This leads to a thought, that Mr. Olympia titles are way too overrated.

Nicknamed as the "Gentle Giant", the german bodybuilder literally shocked the sport when he defeated Ronnie Coleman in 2002's GNC Show of Strength because that time Ronnie was already 4-time Mr. Olympia: His successfulness was party due to his height, he dwarfed many other competitors. Unfortunately for him, he did not beat Ronnie at a Mr. Olympia show, but that is why his name could be mentioned in this article.

Oh yeah, and let's not forget this guy, who is so underrated that nobody on Earth knows his name. Yes, he didn't have the biggest arms, nor the widest back, and he wasn't too symmetrical neither, but one thing is for sure: he had the biggest balls to stand on that stage.

Jokes aside, who do you think was the world's most underrated bodybuilder? I would maybe vote for Thierry Pastel. Or Lee Priest. Please help me with this difficult decision. 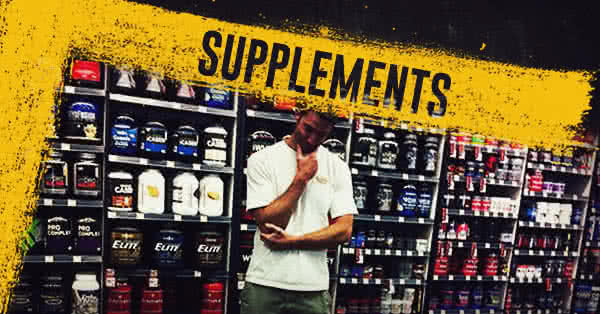 This article is for those who have trouble starting again after a period of enforced rest. Working out after a pause? Can be hard, isn’t it?...
Protect your joints – here's how!

WHEN IT COMES TO SUPPLEMENTATION, THE FIRST THING COMES TO EVERYBODY'S MIND IS PROTEIN POWDER, BECAUSE PROTEIN IS THE NUMBER ONE THING OUR M...